Nikola Tesla was the genius who invented the electronic 20th Century in the late 1800’s. His greatest invention was the Alternating Current (AC), the electricity we use today. Some of his other inventions include Hydro Power Generators, Radio, Neon and Florescent lights, Radar, Tesla Coil (still used in cars today), Remote Control, and the Microwave. By 1886 Tesla realised the AC electricity that he had invented would prove to be detrimental to human health. Before his death he wrote papers detailing on how to counteract the harmful effects of his inventions then passed all his paperwork to Ralph Bergstressor, a young physicist, on how to counteract the biological effects of his inventions.

Today, we have Tesla’s products that have been developed based on his work to free us from harmful electromagnetic fields (EMF) and electromagnetic radiations (EMR). Whenever an appliance is turned on, both an electric and magnetic field emanates, called electromagnetic fields (EMF). Electric fields stop just below the surface of our skin but the magnetic fields pass through the human body. Both types are detrimental to our health. Common sources of high EMFs in buildings are transformers, switchboards, all electrical cables, motors and appliances. The Common source of EMR comes from our mobile phones including all its variations, computers and all wireless technologies. All of these technologies bombard our bodies with harmful fields.

The earth itself has many Geo-magnetic fields carried along what are known as Ley lines and many subterranean rivers or streams. We can be affected by these negative earth energies causing illnesses. This is called Geopathic Stress and it can come from ley lines, underground water or above ground high-tension wires or phone towers. The most common indication of Geopathic stress is resistance to treatment from either conventional or alternative therapies. Geopathic stress does not cause illness, but lowers your immune system and you’re ability to fight off viruses or bacteria. It is the continuous weakening of the immune system and disrupting metabolism on a molecular level that is detrimental to our DNAs.  Common symptoms from these effects include unexplained fatigue, aches/pain, emotional oversensitivity, hyperactivity, aggression, miscarriages, allergies, some arthritic conditions, and cancer or secondary cancers.

The human body is almost wholly electrical, chemical and mechanical. Tesla’s products work on harmonising the electrical components of the body thereby affecting the chemical and mechanical components of our body. The atmosphere also receives electromagnetic energies from the sun, planets or other heavenly bodies in the universe, some harmful while others healing. Light (called photo/tachyon energy) is an example of electromagnetic radiation that can be seen. Other examples are radio waves, microwaves, infrared, ultraviolet, X-ray or gamma rays.

For purchase of any Tesla's Products, please Contact me for details. Products can be posted via Australia Post within Australia.

The pendant is worn over the thymus gland to help the immune system, strengthens your personal energy field, helps to stop harmful effects of EMF, aids in lessening sunburns, activates the lower brain frequencies for receptiveness and concentration. $95 each

Phone tags alter the chaotic pattern from EMF/EMRs in the transmission to and from the antenna of the phone to become biologically harmonious to the user and anyone nearby up to 9 metres away. A MUST for all mobile phones and variations such as iphones, ipads, notebooks etc. If you are using your mobile phone with internet services then you will need at least 2 phone tags. If it is only for phone use then one is required.  $60 each

The House Plate produces a bubble of energy stretching up to 1.5 acres. It helps with geopathic stresses from above the ground. It can also be used with reflexology treatments, treat drinking water and creates a calming influence as well as taking care of EMR’s. $535 each

Electron Stabiliser produces a field of energy to alter the Alternating Current’s (AC) chaotic frequencies to flow electrons in a coherent manner, thereby becoming harmonious to the human body. All man-made electricals causes EMFs radiations are chaotic. The Stabiliser has unique titanium transceivers installed in a specific configuration inside a tamperproof container designed to receive and transmit photon/tachyon energy from the sun in order to do this. This is installed inside the house preferable attached to any electrical apparatus that does not switch off such as fridge, TV, sound system etc. Placing a Stabiliser inside will have effects on all AC current used by any other electrical equipment. $560 each

Water containing minerals or salts are a perfect conductor of energy fields or electricity. The minerals or salts in underground water and in household pipes can attract electricity from power line leakage into the atmosphere. There are also other additives in our water such as chlorine, fluoride or iron oxide from corroded water pipes.

Chlorine is positively ionised (molecules adhere to each other causing it to be partially inactive), giving a strong odour. The Water Kit changes the ionisation and separation of these molecules from positive to a negative ion, making it easier for the liver to eliminate out of the body.

The water kit also removes memory of all other added chemicals, which does not happen with conventional filters. It puts life force back into the water, making it taste and feel like rain water or from a clear mountain stream. It also treats both magnetic and electrical fields in the water. $275 small for units or $355 large for homes 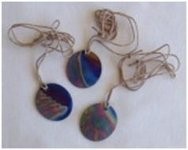 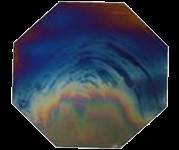